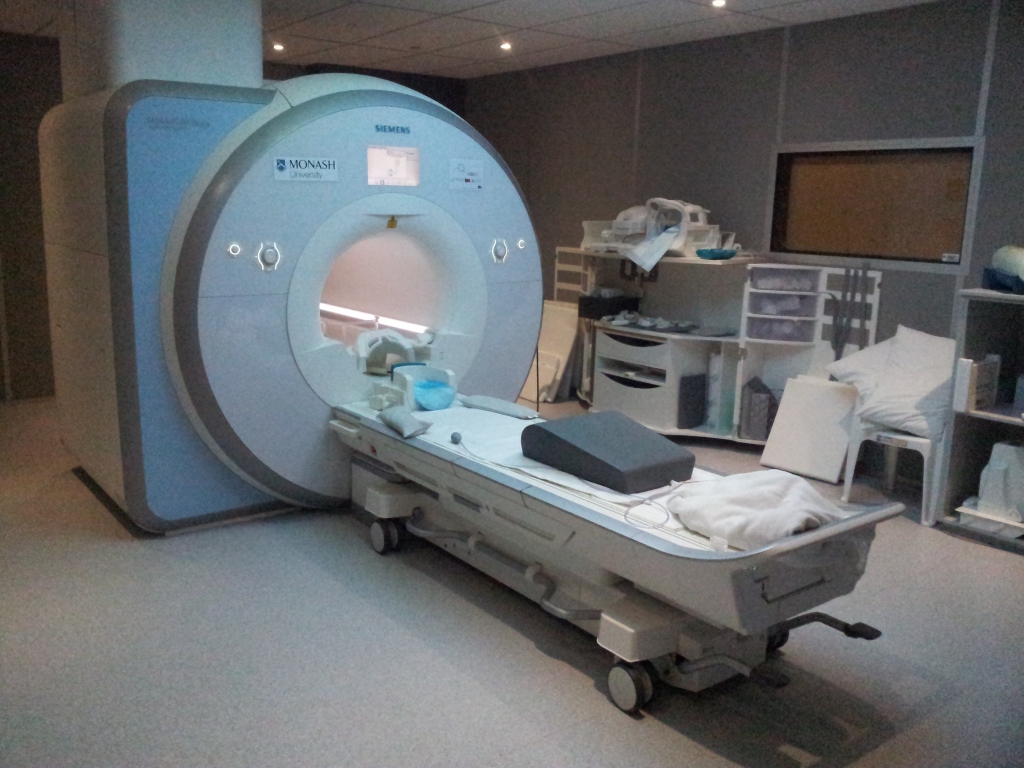 Back in the control room I find my friend waiting for me, all smiles as usual. She must have arrived while I was strapped in the machine.

“Hi!” she greets enthusiastically. “I just saw your brain.”

I suppose this shouldn’t be a surprise, given the situation. Yet I’m caught off guard. How do you respond to something like that? It feels awkwardly personal, like a housemate admitting that they heard you having sex. Is this more or less weird? I wonder.

On one hand, it’s just bits of lumpy grey matter. We all have them, and they don’t look like much. But on the other, it’s a part of you that no one normally gets to see, and it defines absolutely everything about your personality. Also my friend is a neuroscientist, so who knows what she might have been able to read into it. Was she judging me on the size of my hippocampus? Wait, does size even matter, or is it just how you use it?

She’s been watching my face, and maybe she can read my thoughts after all. “Well, only a bit of it,” she clarifies, sounding a little apologetic. “The prefrontal cortex. It was very… handsome.”

What’s going on? I’m at a Biomedical Imaging Research Centre, and I’ve just had a functional magnetic resonance imaging (fMRI) scan. But let me start from the beginning.

The head researcher, Paul* the PhD student, was waiting for me at reception when I arrived. I didn’t have a medical condition or any real reason to get my brain scanned. I volunteered for the study simply because how freaking cool is it to see your own brain? Pretty damn cool, if you ask me.

We went through the consent and medical forms. No history of epilepsy: check. No metallic implants or bits of shrapnel in my body: check. This last one is very important because fMRI machines create powerful magnetic fields. I assume that if you had, say metal pins in your skull, the machine would suck them right out through your face.

I followed Paul through to the control room, where I met Dave* the imaging technician. He was pleasantly spoken, and my gaydar gave a faint uncertain reading. He invited me to help myself to a platter of sandwiches and make myself comfortable. I did so. Dave returned to working away at three large computer monitors, preparing the scanning software.

Through a wide blue-tinted panel of glass I could spy the fMRI machine, looking like a giant upright donut. It was smooth and white, and very much resembled something you might find in the game Portal, or perhaps Kubrick’s 2001: A Space Odyssey.

How does MRI work? Well to begin with, the machine has to create an extremely powerful and uniform magnetic field. The strength of this field is typically about 1.5 tesla. For perspective, this is about five times the intensity of an average solar sunspot.

To achieve this, the machine is fitted with superconducting magnets which are cooled by liquid helium. The resulting magnetic field excites hydrogen atoms present in water molecules in your brain, causing them to emit a radio frequency signal. This signal is detected, and an image is assembled.

Dave asked me to remove any metal items from my person and follow him into the scanning room. We passed though a reinforced door which read “MAGNETUM” in imposing capitals. Black and yellow triangles on either side warned of “MR- Magnetic Field” and “High Frequency Field”. Yep, watch out for fields.

A series of panels on the ceiling were illuminated to show a beautiful image of blue sky, wispy clouds and tree leaves in the foreground, as if you were lying in a park looking up. “It’s to help people with claustrophobia,” Dave later explained to me, when I was back in the control room watching my friend’s brain materialise on the screen.

I lay down on a special table, with my head at one end of the donut hole. Dave stuffed earplugs into my auditory canals. You see, rapid changes in the magnetic field of the fMRI machine cause the magnets to vibrate, which creates a loud hammering sound. Foam cushioning was then crammed around my head, and a Velcro strap placed across my forehead to hold it in place. It was a bit of pressure and not overwhelmingly comfortable, but it was definitely not as restricting as I had been anticipating. Capillaries and neurons are pretty tiny, so I had assumed my head would have had to be fully immobilised to get an accurate reading. As it was, I could still move a bit.

A plastic visor was clicked into place above my eyes. It held a mirror which redirected my vision toward a monitor at the far end the donut. Wherever he was, Dave manipulated some controls and the table rose up and slid my head into the donut.

Paul came over to see how I was going. Just fine. He placed a controller with a large button into my left hand, explaining that I had to push the button whenever I saw the same image twice in a row. This was to be the experiment. In my right hand he placed a squeezy bulb, which I could use if I ever got claustrophobic and wanted to stop the experiment. Pssh, claustrophobia. I was actually feeling pretty excited and eager to start.

Everyone else left the room, and the quietness was soon replaced with Dave’s soothing voice over the intercom. He informed me that there would be a few scans of varying lengths. The first was to be a mere ten seconds, and would sound a little strange.

A harsh distorted electronic tone burst forth, like a synth from some Daft Punk song. I was glad for the earplugs. It held for a moment, rose in pitch, held for another second or two, and I anticipated the tone rising again – the sacred melody of neuroscience being revealed to me. It dropped back to the first tone instead. Then, quiet.

Dave’s voice dropped in again over the intercom, asking me how that was. He informed me that the next scan would take about four minutes. Ok.

Brand new electronic tones clicked and whirred. At some point the notes settled into regular monotonous pulses, and my thoughts drifted. Is this what life feels like for a photocopier? Stuck in one place, doomed to a single view, hearing the repetitive hum of page after page being scanned and printed. Or I felt like a person still plugged in to the Matrix in a little isolated pod, oblivious to the rest of the world out there.

I closed my eyes and started to feel warm and sleepy. The experimental explanatory statement reads:

“The radiofrequency waves we use to create the MR scans can cause your head and body to warm up slightly. This is not a problem, and you usually won’t notice it at all, as your blood flow will increase slightly to take the heat away.”

Maybe I noticed it.

My mind started to recite the “To be or not to be” soliloquy from Hamlet. Haha brain, “whether ‘tis nobler in the mind to suffer”, aren’t you clever? Then I started to worry that maybe I was causing the language centres of my brain to light up, giving a misleading reading. Quick, think about maths! No wait, probably I should just think about nothing. But I don’t seem to be able to! Argh!

Finally I decided that if it was going to be a problem, they would’ve warned me in advance not to think about anything. Surely they were just checking my neural structure now anyway.

Dave gave me one more preliminary scan, this time lasting a minute. A softer, more constant buzz hummed for the duration of this one. I imagined the magnetic fields raging and swirling around me, like some divine battle, whipping up the water molecules in my brain and battering them one way then the other. Surely that’s got to do something to one’s perception? I focused inwardly and tried to decide whether I could feel anything. Possibly something subtle… but it could easily by placebo effect. No, probably nothing.

Finally it was time for the experiment proper.

A stream of pictures flashed by on the screen: faces, flowers, buildings, abstract tessellated patterns – repeating and repeating, faster and faster. My finger twitched nervously on the button; I cursed silently when I pressed it accidentally, but grinned with pride when I matched the abstract tessellated patterns. I started seriously doubting my skills of facial recognition.

The second task involved watching coloured dots move across the screen and involved more button-pressing. I found myself feeling strangely exhausted and having to close my eyes between rounds.  At some point I remembered that they were using infrared lasers to track my eye movement, then I worried that maybe I was screwing up the experiment by closing my eyes so often.

When everything was finished, the lovely Dave burnt me a disc containing the map of my brain.  It’s really quite fascinating and gross scrolling through from one hemisphere to the other, watching the cortex burst forth, swirl and evolve as it reaches the midbrain and the medulla and corpus callosum appear, then warp and recede away as you pass out the other side.

I imagine I will treasure this map until the day that my brain shrivels up from some neurodegenerative disease, and ironically I can no longer fathom what I’m looking at. But I suppose it won’t matter by that point. The pictures wouldn’t be of me anyway.

* Name in this article have been changed.